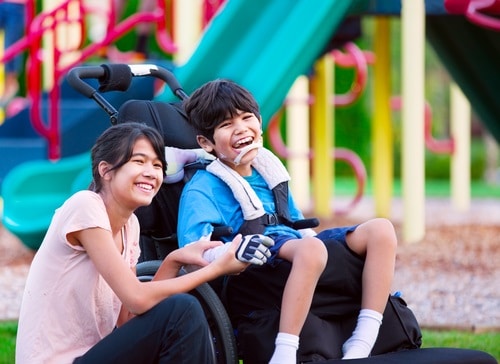 There’s something about the spring … Everywhere you look, people are smiling, doors are flung open, coats are abandoned, neighbors are chatting and playgrounds are teeming with children.

“The playground is a child’s classroom,” says Shane’s Inspiration, a California-based organization whose mission is “creating social inclusion for children with disabilities through the vehicle of inclusive playgrounds and programs.”
Shane’s Inspiration is one of many organizations to recognize the benefits of inclusive or integrated play, both for children with disabilities and their typically developing peers.

Through playgrounds, say the folks at Shane’s Inspiration, children “learn to negotiate while waiting in line for the slide. They learn to communicate by playing pirates on the bridge. Most importantly—they learn to trust themselves and others by interacting physically, emotionally and socially with their peers.”

Yet, accessing playgrounds that fully meet their needs isn’t a given for children with disabilities.

According to Easter Seals, a 97- year-old nonprofit that assists more than one million individuals with all types of disabilities and their families each year,
“Even with civil rights legislation prohibiting it, people with disabilities are regularly excluded from typical recreation opportunities.”

The problem? The ADA standards for accessible design of recreation facilities adopted in 2010 and enacted in 2012 just didn’t go far enough.

For example, though wheelchair-bound children may now be able to wheel themselves onto an ADA-compliant playground, once they arrive, there may be few pieces of equipment they can use.

Likewise, children who are blind will get little benefit from an ADA-compliant playground that doesn’t include tactile elements or braille signs to help them with mobilization and orientation.

If playgrounds are not fully inclusive, they are unlikely to promote meaningful interactions with able-bodied peers who are making full use of their surroundings. And that’s a loss for everyone.

Fortunately, things are slowly changing. As more and more charitable organizations and parents of children with and without disabilities advocate for the creation of inclusive or universally designed play environments, the playgrounds are becoming more prevalent in public and private settings across the country.

“Easter Seals has endorsed universal design as a proactive approach to facility design that is more inclusive. It goes beyond the ADA and promotes the social integration of children with disabilities early in their lives,” the organization says on its website.

Lisa Smacchia is acting director at Easter Seals’ Project Explore, Project Inspire and Project Imagine. She says that the universally designed playground, at Project Explore in Valhalla, N.Y.—the first of its kind in the New York’s Hudson Valley Region and donated by Entergy—features smooth ground surfaces, multiple levels that can be accessed with ramps and therapeutic swings and slides. These elements “make it possible for children with special needs as well as their typically developing peers to integrate and play together with ease,” says Smacchia.

Not surprisingly, inclusive playgrounds are far more costly than traditional playgrounds. But, as many have discovered, fundraising is effective and the paybacks are huge! For suggestions on how to finance an inclusive playground in your community, visit https://www.playandpark.com/funding/grant-opportunities

For a list of some of the best accessible playgrounds in the U.S., visit http://www.special-education-degree.net/30-most-impressive-accessible-and-inclusive-playgrounds/

Enabling Devices wishes you and yours a playful spring!