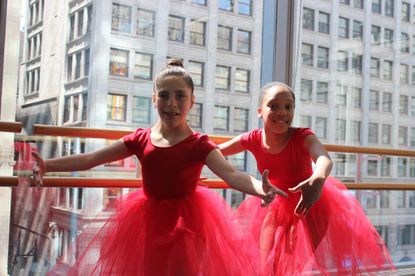 It’s “Nutcracker season” — the time of the year when ballet companies around the world entertain audiences with performances of Pyotr Ilyich Tchaikovsky’s classic Christmas ballet, “The Nutcracker.”

First performed in St. Petersburg, Russia in 1892, “The Nutcracker” didn’t become a holiday custom in the United States until the mid-20th century. The two-act ballet tells the story of a young girl and her favorite Christmas gift — a nutcracker who comes to life on Christmas Eve.

This season, the elite, Chicago-based Joffrey Ballet’s “Nutcracker” will include roles for Emma Lookatch and Larke Johnson, two young dancers with cerebral palsy, from the Joffrey’s adaptive dance program. The program serves students with cerebral palsy, multiple sclerosis, down syndrome and other disabilities.

In 2016, the Joffrey’s “Nutcracker” was re-envisioned by Tony Award-winning choreographer Christopher Wheeldon. Wheeldon’s version is set at the World’s Columbian Exposition of 1893, (also known as the Chicago World’s Fair), twenty years after the Great Chicago Fire of 1871. Wheeldon’s “Nutcracker” also portrays a family and community markedly different than the ones in the traditional “Nutcracker.”

As described by WTTW’s Hedy Weiss: “… rather than focusing on the Christmas celebrations of the usual well-to-do family historically at the ballet’s center (whether set in Europe or, as in the long-lived version by Robert Joffrey and Gerald Arpino, in an upscale Victorian-era New York household), it focused on the community of cash-strapped immigrant artisans and laborers who lived and worked in the shadow of the fair.”

Emma and Larke will share the role of “Worker Girl,” a character who appears in Act 1 during the ballet’s iconic Christmas Eve party scene. The teens will dance in a late nineteenth century-era wheelchair.

Suzanne Lopez, who danced in Robert Joffrey’s version of “The Nutcracker” for 20 years, is now in charge of “The Nutcracker’s” children’s cast. Speaking with the Chicago Tribune recently, Lopez said Wheeldon “absolutely loved the idea [of bringing in dancers from the adaptive dance program] and thought it was a lovely way to honor the legacy of Joffrey and Arpino. … Also,” added Lopez, “this particular version of ‘The Nutcracker’ is so much about community. What better representation than that, that people come to the theater and look up on stage and everybody feels represented?”