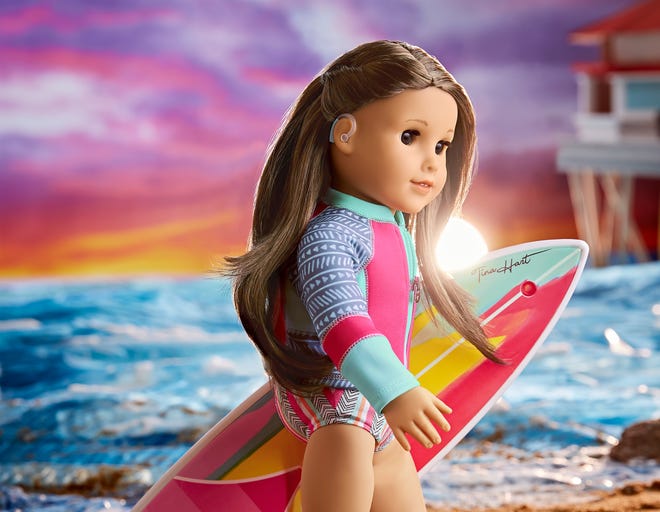 Between two and three out of 1,000 children born in the United States have hearing loss according to the National Institutes of Health. Now, those children have an American Girl doll with whom they can identify.

Last month American Girl, a subsidiary of Mattel, announced that its 2020 Girl [doll] of the Year, a character named Joss Kendrick, has congenital hearing loss. “Joss — a fierce athlete born with hearing loss and a passion for surfing and competitive cheer — joins American Girl’s lineup of inspirational characters who impart meaningful life lessons to help girls learn and grow with confidence,” said Mattel in a press release.

Joss, who comes with a removable hearing aid, is being marketed with the help of pro-surfer Carolyn Marks. To commemorate the release of the new doll, Mattel partnered with Hearing Loss Association of America (HLAA), making a $25,000 donation to support the organization’s education and awareness programs as well as its 2020 Walk4Hearing. Throughout 2020, the company will collect donations for HLAA in its stores and online.

American Girl already sells accessories for dolls such as wheelchairs, hearing aids, diabetes care kits and crutches, but this is the first time a doll’s back story (which is told in a two-book series) includes a disability.

Mattel, which introduced two new Barbie dolls last year — one that uses a wheelchair and one who has a prosthetic leg — isn’t the only toy company that now sells products that reflect the experiences of the 6.2 percent of children, ages 5-15 in the U.S. who have disabilities. Playmobil has been selling figures with wheelchairs and service dogs since 2015 and Lego introduced a wheelchair-using figure in 2016. Irish doll-maker Lottie Dolls recently began selling Mia the Wildlife Photographer, a doll with cochlear implants! In addition, Lottie Dolls sells many dolls who wear eye-glasses and recently created a doll who represents a boy with autism and ADHD.

One reason for this revolution in toy-making is the 2015 #ToyLikeMe campaign. The brainchild of Rebecca Atkinson, a British writer and journalist with a hearing impairment, #ToyLikeMe lobbies the toy industry to create toys that represent people with disabilities.

“As someone who had grown up wearing hearing aids, I remembered firsthand how it felt to be a child who never saw themselves represented by the mainstream and what that can do to a child’s self-esteem,” said Atkinson on the nonprofit’s website. And while children with disabilities enjoy playing with dolls and figures who look like them, all children can benefit from inclusive toys. As Atkinson points out, “To exclude in the toy box teaches All children it’s OK to exclude in real life. I wanted to change this for generations to come by getting global brands like Lego, Mattel and Playmobil to include positive representations of disability in their products.”

These days, #ToyLikeMe has grown into a full-fledged nonprofit organization offering industry consultancy, education, pop-up exhibitions and workshops. You can learn more at Toyslikeme.org.