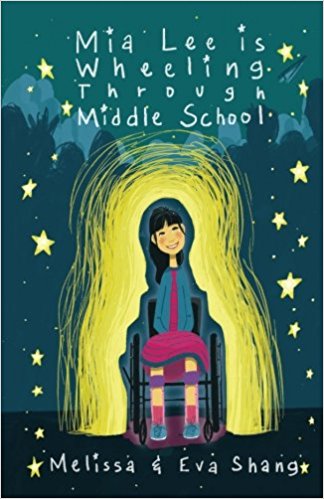 Like so many girls her age, Melissa Shang of Westborough, Massachusetts, loves American Girl dolls and the accompanying books that tell the dolls’ stories. The company’s BeForever line includes dolls and stories that teach children ages 8-13 about American history, with characters including Kaya, a Native American girl living in the mid-late 1700s, Felicity, whose story takes place at the beginning of the American Revolution, Josefina, a Mexican-American girl living in the early 1800s and Molly, who resides in Illinois during World War II. Beginning in the early 2000s, the company launched its Girl of the Year line, featuring contemporary heroines of different races, religions and ethnicities dealing with a variety of challenges.

Melissa enjoyed playing with the dolls and learning about their stories, but as a girl with Charcot-Marie-Tooth disease, a type of muscular dystrophy, she longed for an American Girl doll who like her, had a disability. With the support of her older sister Eva, in 2014 Melissa initiated an online petition asking the creators of American Girl dolls to add a Girl of the Year doll with a disability. Though the petition went viral, was signed by more than 140,000 people and garnered significant media attention, the company has not committed to produce a doll with a disability.

So, the Shang sisters moved on to Plan B: They wrote a book about a character named Mia, who like Melissa, attends middle school, has hobbies and friends and uses a wheelchair. The sisters set up a Kickstarter campaign, quickly raising enough money to hire an editor and literary agent and eventually, they sent the book, “Mia Lee is Wheeling Through Middle School” out to publishers.

Yet, the responses Melissa received from publishers were disappointing and remarkably like one another. Publishers felt that Mia, the book’s protagonist, seemed “too happy” for a girl with a degenerative nerve disease who used a wheelchair.

Writing in an opinion piece for the New York Times published in June, 2017, Melissa explained, “Mia Lee, my sassy, YouTube-loving heroine, differed too much from the convention of what a disabled kid is supposed to be like…There are very few stories about kids in wheelchairs, and there are even fewer with a disabled person who is cheerful and happy.

“Disability is always seen as a misfortune,” wrote Melissa, “and disabled characters are simply opportunities to demonstrate the kindness of the able-bodied protagonists.”

Still determined to get her book out, Melissa used money from the Kickstarter campaign to self-publish it. In August 2016, her dream came true. Since then, “Mia Lee is Wheeling Through Middle School” has sold hundreds of copies. According to Amazon.com “Melissa has gone on to become a young disability advocate. She has given a TEDx talk, spoke at the United Nations, and introduced Malala Yousafzai at the National Constitutional Center.”

To learn more about Melissa Shang, visit her website at melissashang.com