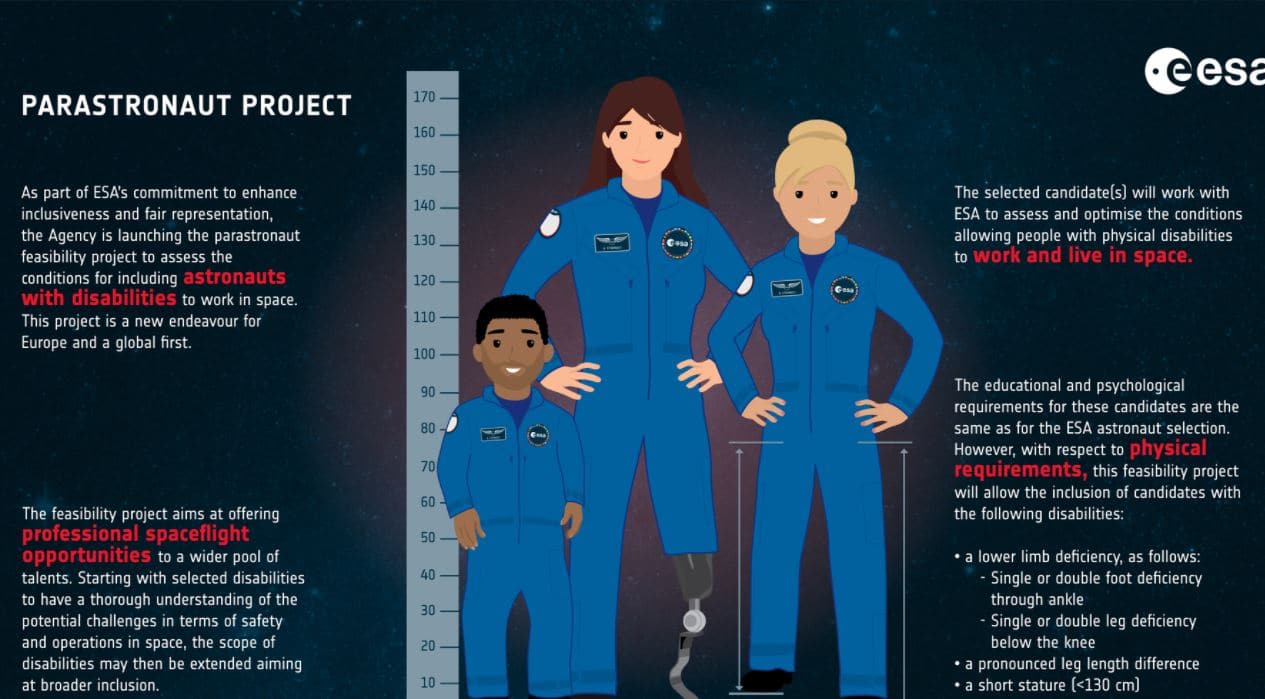 Once upon a time in the not so distant past, many professions were off limits to individuals with disabilities. While disabled individuals still face significant obstacles entering the job market, one profession that was previously a pipe dream for the disabled is now a possibility.

In March of this year, the European Space Agency announced its search for the first astronaut(s) with disabilities. ESA’s “Parastronaut Feasibility Project” seeks individuals “who are psychologically, cognitively, technically and professionally qualified to be an astronaut, but have a physical disability that would normally prevent them from being selected due to the requirements imposed by the use of current space hardware.”

According to ESA, the time for the project is now. The agency recognizes that “since the last selection of ESA Astronauts in 2008-09, the expectations of society towards diversity and inclusivity have changed.” ESA wants to be part of that change for several reasons:

1. ESA recognizes the value of inclusion. According to the ESA website: “Including people with special needs also means benefiting from their extraordinary experience, ability to adapt to difficult environments, and point of view.” ESA leadership also believes the organization has a responsibility to work toward providing an inclusive workplace and industry.
2. ESA has a desire to “lead by example.” The agency hopes that the project will encourage qualified disabled individuals to apply for other jobs at the agency and to consider careers in the space sector.
3. The agency stated that having disabled astronauts “could bring some new, astonishing results in the field of life sciences for the benefit of even more people back on Earth.”

To come up with conditions for the project, ESA consulted with the International Paralympics Committee. Based on the consultation as well as the agency’s own assessments, for now, ESA has limited applications to those with very specific disabilities — “people without a lower leg, those who have one leg shorter than the other and adults under 4¼ feet tall.”

Since the project was announced, ESA has fielded hundreds of applications from candidates in 22 countries throughout Europe. The deadline for applications for the project has been extended to June 18, 2021. ESA stresses that the project is still in the experimental stages, so the recruitment is not associated with a particular space mission or launch date.

In the United States, NASA has expressed support for the project. So far, however, the agency has not opened its own application process to those with disabilities. In a statement, NASA’s Kathryn Hambleton told WIRED magazine, “We at NASA are watching ESA’s para-astronaut selection process with great interest. NASA is not currently considering changing our selection criteria, however space is quickly becoming more accessible than ever before thanks to NASA’s dedication to commercial and international partnerships. We look forward to working with ESA, and all our partners’ new astronauts in the future.”

Though this is the first time a government agency has recruited disabled individuals for a potential space mission, it is not the first time a person with disabilities has attempted space travel. In 2007, the late cosmologist Stephen Hawking who had amyotrophic lateral sclerosis

(ALS), experienced approximately four minutes of weightlessness when he rode on the Zero Gravity Corporation’s modified Boeing 727 jet. It was the renowned scientist’s 65th birthday gift to himself.