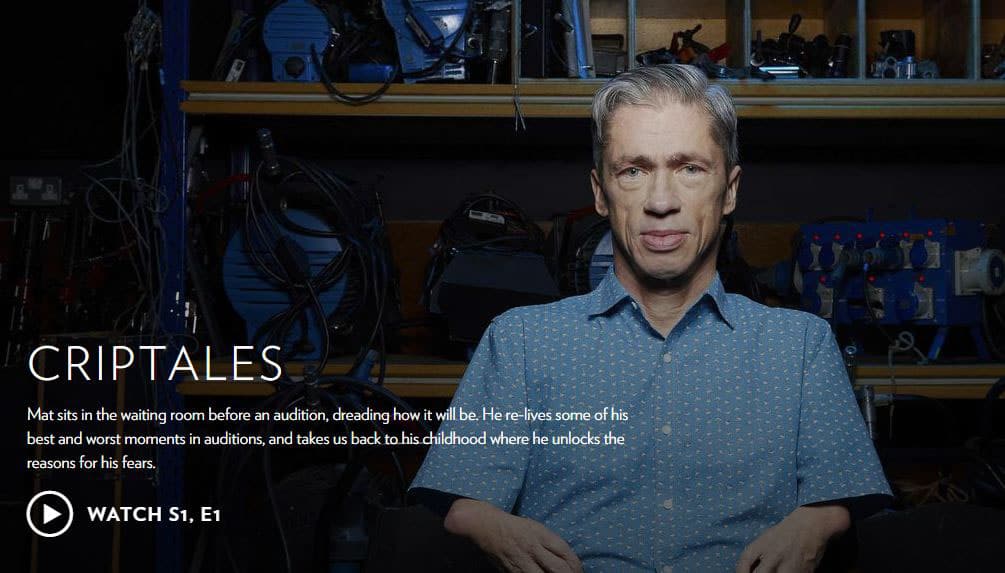 Here at Enabling Devices, we’re always on the lookout for new films and TV shows with inclusive, diverse casts and realistic portrayals of characters living with disabilities. “Crip Tales,” a new BBC America series is certainly one to watch.

The series, which aired last month in honor of National Disability Employment Awareness Month, was created by British actor, musician and writer Mat Fraser (“American Horror Story,” “His Dark Materials”). It can be viewed online at BBC America.

“I’m so proud and excited to present these wonderful stories for mainstream TV audiences around the world, thanks to BBC America and BBC Studios,” said Fraser in a press release. “The authentic voices, taut direction and shining performances combine to make a series of diverse and dramatic monologues that are compelling, refreshing, and above all, entertaining.”

The first season of “Crip Tales” encompasses six fictional short films largely written and performed by individuals with disabilities and based on research about the disabilities community in Great Britain. Each monologue focuses on a defining moment in the character’s life.

Fraser, who has thalidomide-induced phocomelia, a birth defect that causes his arms to be short and close to his torso, performs the first monologue, in which he describes the ordeal of auditioning with a disability. Simultaneously poignant and humorous, the monologue pokes fun at the discomfort of casting agents, directors and producers when a disabled actor shows up for an audition.

In episode 2 — “Paper Knickers” — performed by Jackie Hagan — a young woman must decide whether to follow her doctor’s advice to have her leg amputated. Meanwhile, she obsesses about a new love interest, something everyone can relate to.

Episode 3 — “Thunderbox,” introduces us to a young woman (Ruth Madeley), who becomes pregnant from an encounter at a 1960s music festival. Because of her disability, doctors and her family try to dissuade her from keeping the baby.

“The Shed,” Episode 5, tells the story of a disabled children’s book writer (Carly Houston,) who falls in love with her next-door neighbor. Her caregiver disapproves of the relationship.

Fraser made a point of hiring women actors for most of the show’s episodes since women with disabilities are particularly underrepresented in the entertainment industry. It was also important to him that many of the stories focus on romantic relationships and sexuality, he told Zack Budryk of The Hill, “Media portrayals of disabled people typically depict them as ‘asexual or infantilized sexually’ when nothing could be further from the truth.”

Given his own frustrations as a disabled actor, Fraser made sure that almost everyone involved with the series is a person living with disabilities. “I wanted this to be a wholly disabled experience,” he told Budryk.

Though Fraser believes that opportunities for disabled individuals in the entertainment industry are increasing, there is still a long way to go. He hopes that “Crip Tales” will make a difference.

In recognition of Martin Luther King Day, our office will be close Monday (1/18). Online ordering is available! Dismiss