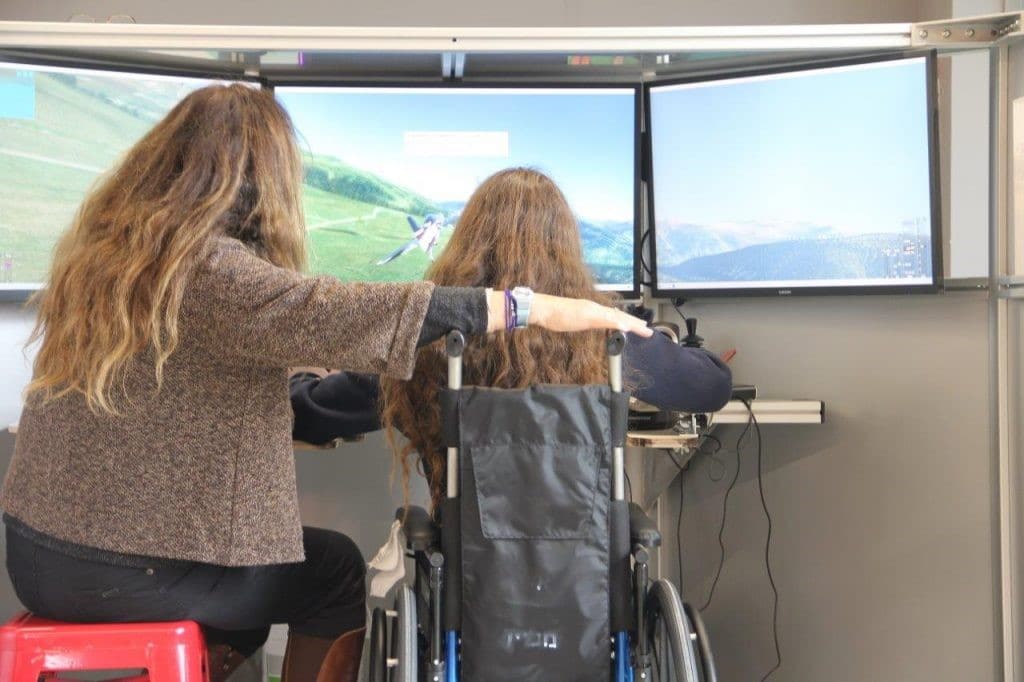 At Enabling Devices, we’re all about finding ways for individuals with disabilities to access life’s peak experiences. That’s why we were so excited when we learned about the invention of a new adaptive cockpit that allows wheelchair users to experience the thrill of flying through the “Microsoft Flight Simulator,” a series of flight simulator programs for Microsoft Windows operating systems.

The cockpit was created during the Microsoft Global Hackathon at the Israel Garage – one of 12 spaces all over the world where hackers, makers and innovators envision solutions to local and worldwide challenges. The Garage team was assisted by engineers at the Microsoft Israel R&D (research and development) Center. Previous Microsoft Garage creations include the Xbox Adaptive Controller, Eye Control for Windows 10, and Seeing AI.

The adaptive cockpit is wheelchair accessible, providing adequate space for motorized or regular wheelchairs and room for a copilot. It includes “a portable aluminum structure and three monitors that provide a 180-degree, panoramic viewing angle for the pilot,” writes Suzanne Choney, a writer for the Microsoft News Center.

“From their cockpit perch, they fly alongside birds over oceans, urban landscapes, forests carpeted with trees and golden deserts. … cables are hidden so they don’t get in anyone’s way. The cockpit doesn’t require using a keyboard, except for a sign in, which can be done by a staff member. Players use a hand-operated throttle and joystick to maneuver the plane. While that can be an issue for patients whose hands are not agile, the team modified the joystick’s sensitivity to allow for easier distance control.”

After development of the adaptive cockpit was complete, its first stop was ALYN Hospital, a pediatric rehabilitation center in Jerusalem, where 13-year-old Etai Rimel had the opportunity to try it out. Etai lost his leg and sustained brain injuries after he survived a catastrophic car accident. With a professional pilot at his side, Etai was able to experience the sensation of flying over his home from the adapted cockpit. After the virtual flight, the teen said, “It was a once-in-a lifetime experience to be able to fly wherever I want. …I really enjoyed controlling the machine. For a whole hour, I was in a very different world from my everyday life, like a free bird, like escaping from reality.”

The cockpit’s next landing was at a site that is part of the House of Wheels, an Israeli nonprofit day center for young people with disabilities. There, Netanel Gvili and Yaniv Wanda, both twentysomethings with cerebral palsy, had the opportunity to give it a whirl. After using the flight simulator, Gvili said he enjoyed the feeling of independence that the simulated flight offered.

“I can choose where to fly. How to fly. It really simulates a flight. Computer games are not new to me, but all of the additional connected devices with the adaptive cockpit are really cool.”

Clinicians say the cockpit is therapeutic for users.